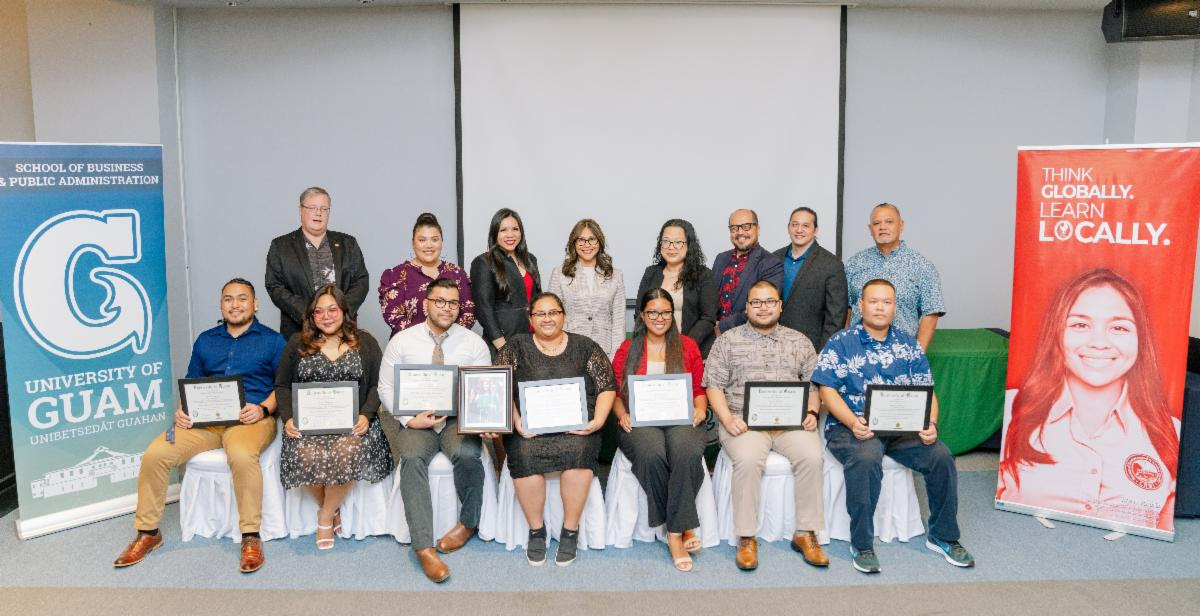 During the ceremony on Friday, NMC President Galvin Deleon Guerrero, EdD congratulated the graduates who received their honors distinctions.

Dean of the UOG School of Business and Public Administration Dr. Annette T. Santos also addressed the honorees, and told them that it is an “amazing accomplishment.”

“I look forward to celebrating our graduates that have come here today for this Latin honors ceremony,” Santos said. “It really is the result of the collective effort of your families, your friends, your support system, and also institutions that care about you. I hope that that spirit of care carries through in the work that you will do as graduates of both our institutions.”

Estrada, one of the graduates who received a distinction, said that she is grateful for the partnership between UOG and NMC.

“[This cohort] has allowed us to complete our bachelor's degree from home as well as strengthen the relationship between UOG and NMC,” Estrada said. “It is a nice feeling knowing that all of our hard work paid off.”

Macaranas, another graduate, was also honored to be a part of the cohort.

“In the near future I intend on furthering my education in criminal justice and utilizing it to give back to my CNMI Community through law enforcement,” Macaranas said. “I would like to thank the NMC team who made the program happen, namely, Professors Zerlyn Taimanao and Joe Taijeron, who provided so much to us as students throughout our academic journeys.”

Taijeron and Taimanao were later commended by Admissions Chair Dr. Ronald L. McNinch-Su for their hard work and dedication in the criminal justice program.

“This program would not have happened without their hard work,” McNinch-Su said. “It's the administrative backbone that really creates these wonderful things.”

At Friday’s ceremony, her family was there to receive her diploma with the distinction.

In Deleon Guerrero’s opening remarks, he said that Cabrera continued to persevere to get her diploma.

“Despite typhoons, despite a pandemic, despite her own personal health challenges, she persisted – she graduated,” Deleon Guerrero said. “We were so blessed that last year she was actually able to walk at that graduation.”

Macaranas said he would also like to express honor and gratitude to Cabrera, to whom he considered someone as family.

“She persevered in this program diligently, alongside many challenges she was faced with, and on top of it all, she still managed to be such a great friend as we carried each other throughout all of undergraduate school,” Macaranas said. “We graduated together with our Associates Degree and our Bachelor's Degree, to which I can attest that Arianne was one of the most hard working, and unselfish people I have ever met. Although she is unfortunately no longer with us today, her strong-willed character will live with us forever.”

McNinch-Su also lauded Cabrera in his remarks for her determination to finish her degree.

“She's smart, she was motivated, and a fine and wonderful young person,” McNinch-Su said. “I was so impressed and I was very saddened to hear about her passing away.”