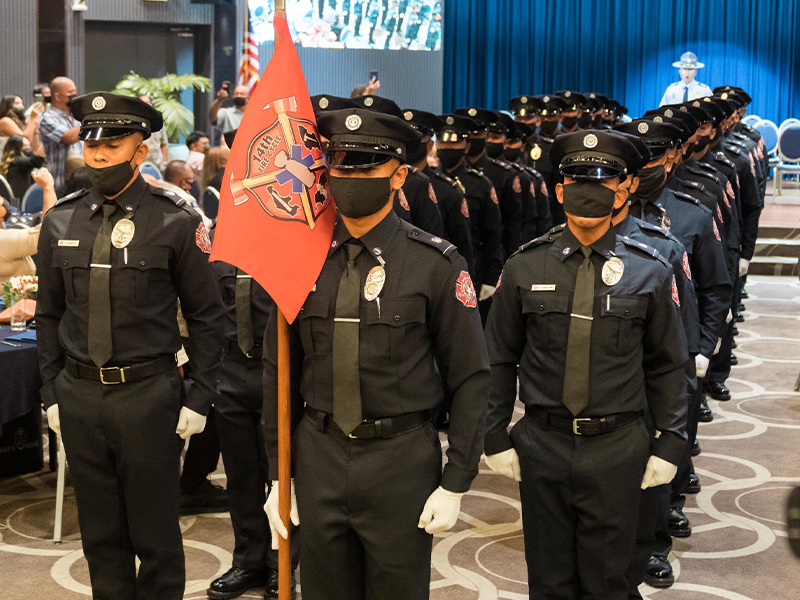 RUFINA Sablan, the youngest of eight siblings, is the 14th Fire Academy valedictorian. Sablan was among the 30 new firefighters sworn in at the Department of Fire and Emergency Medical Services’ 14th Cycle Fire Academy graduation ceremony on Jan. 7 in Kensington Hall.

Sablan, the first female cadet to receive the fire academy’s top award, said she didn’t believe that she could meet the physical requirements.

“But then I pushed myself, and although there were days that I wanted to quit, I did it for my family and I did it to make everyone proud. I wanted to help the community, I wanted to be a firefighter, I wanted to be there for everyone...but I really doubted myself...[yet] here I am today,” she said.

As for receiving the top award, Sablan said, “I really thought others did better...but in the end I got it, and I am very happy.”

Asked what inspired her to join the fire academy, Sablan said, “I was actually a fire dispatcher. I was in the fire department already, but I wanted to climb the ‘stairs,’ I wanted to better myself, and to better my education, to learn more and to prove that I could do what the men were doing.”

She added, “Females can do what men can do. It doesn’t matter if we’re weaker...or smaller, we can do what you guys can do,” Sablan said.

As a firefighter, she said she wants to continue learning. “And when you need me, I will be there,” Sablan said.

Sablan said the most memorable moment in the fire academy was the personal bonding that she shared with her fellow cadets. “Having each other's back when we were suffering during the training — we are still there, laughing, smiling.”

Sablan’s parents are Norma Fujihira and Vincent Sablan. “I have five sisters and two brothers — I am the youngest.”

The fire academy officially began on July 19 with 43 cadets: seven from Rota, six from Tinian, and 30 from Saipan.

To officially pass the fire academy, the cadets were required to, among other things, acquire 40 academic credits from Northern Marianas College.

Superior Court Associate Judge Joseph N. Camacho swore in the fire academy graduates and pointed out that when they took an oath of office “they bind themselves and their loyalty to the CNMI Constitution.”