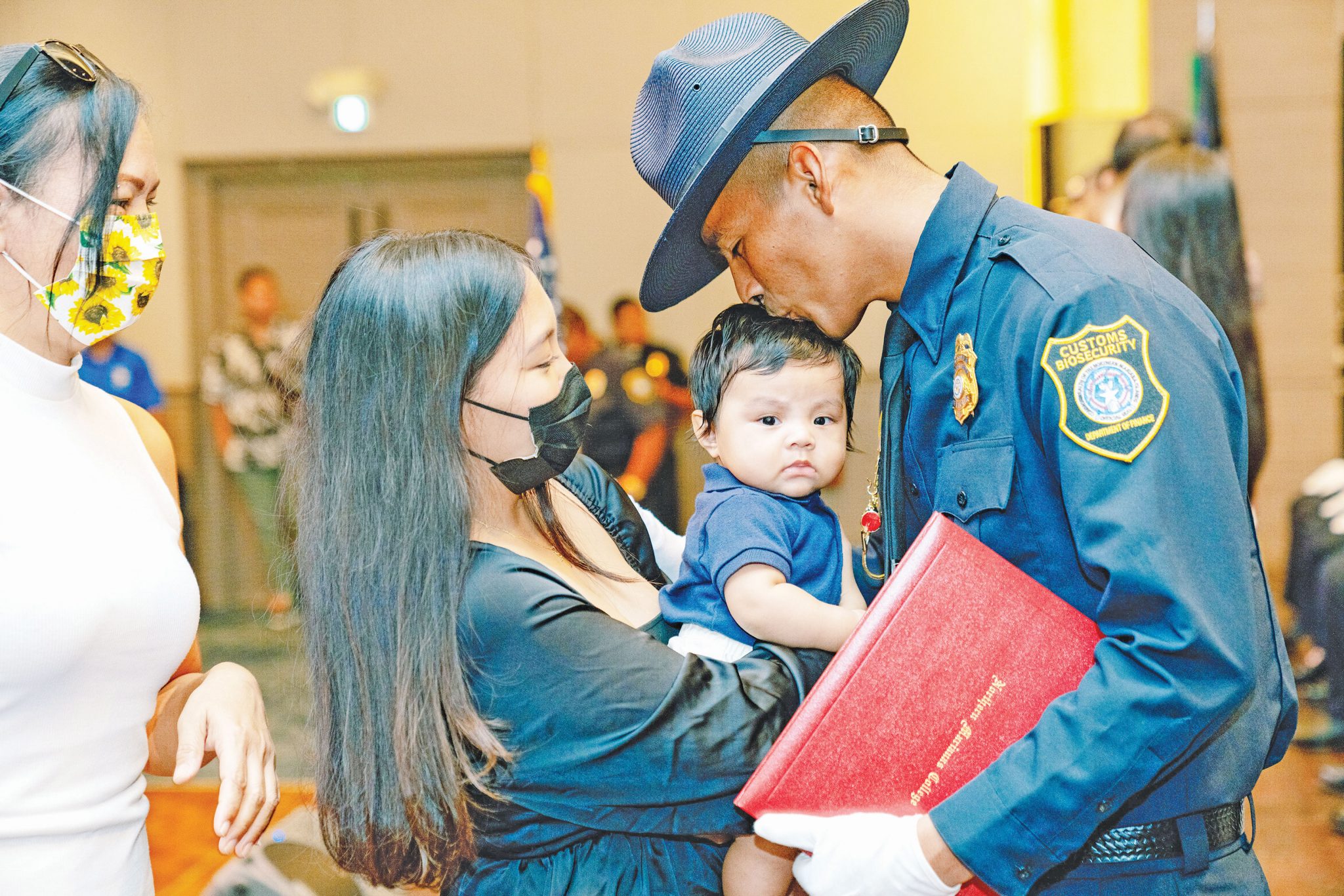 Oiterong, who is also a former member of the U.S Marines for four years, led the 29 cadets who became the newest officers of the CNMI Divisions of Customs and Biosecurity after several months of rigorous training in areas such as Constitutional Law, Report Writing for Law Enforcement, Officer Survival Skills, Transportation and Border Security, Emergency Vehicle Operations, Firearms Safety, and more. In addition, the officers earned their Basic Law Enforcement Certificate of Completion, which includes 40 college credits from the Northern Marianas College.

Attended by several dignitaries and many family members, and friends, the occasion was graced by the presence of Gov. Ralph DLG Torres, Finance Secretary David DLG Atalig, and retired U.S Army Lt. Col. Clement R. Bermudes, who all shared inspiring remarks and extended their congratulations to the graduating class. CNMI Supreme Court Chief Justice Alexandro C. Castro officiated the swearing in of the new officers.

In her remarks, Oiterong said, “I’ve very proud of myself [and] my fellow cadets. We’ve made it all the way until graduation day. No one fell out, no one dropped out and so I’m really happy about that.”

In a later interview, when asked what made her go into this line of work, she said “I chose Customs because I wanted to go into a field where I can give back to the community, and Customs does that when it does investigations into the things we are trying to keep out of our island.”

Class salutatorian Tindin L. Leon Guerrero said that he had been an early entry in the academy and has been involved in the program for a year. “It’s a good feeling. All the hard work paid off,” he said. “I’m very excited about this career. I chose this career because it would get me further into what I want to pursue, which is federal law.” Leon Guerrero also received a Physical Fitness Award.

Also receiving special recognition were Kane P. Ybanez, who received the Leadership Award, and Raymond Babauta who was Top Gun.

Upon the completion of the academy, and receiving their Basic Law Enforcement Certificate, the graduates also earned 40 college credits from NMC.

The 9th Cycle Customs and Biosecurity Academy was a partnership between NMC and the Division of Customs and Biosecurity, and was provided support from many other agencies as well. The 29 graduates had been involved in the academy’s intensive physical and educational training as cadets since March this year, with the curriculum involving a mix of academics and hands-on training.