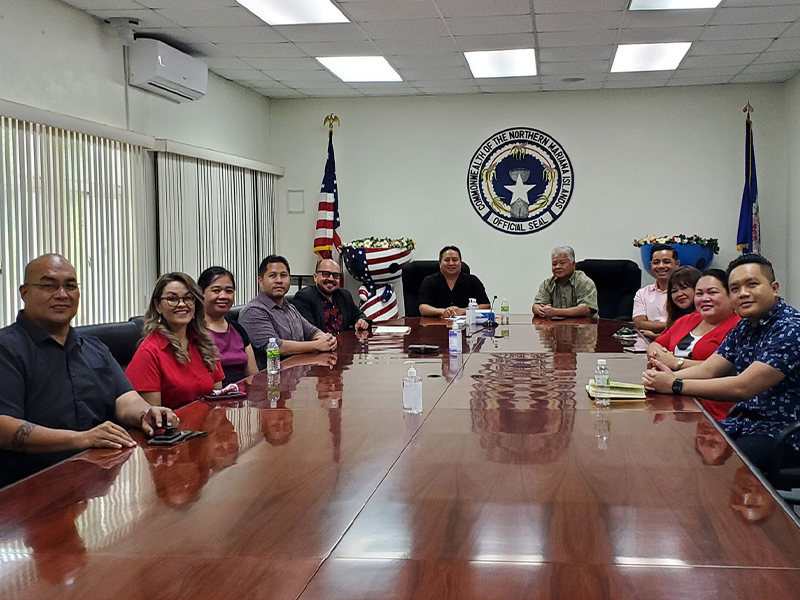 The newly-installed president of the Northern Marianas College, Dr. Galvin Deleon Guerrero, called on Gov. Ralph DLG Torres and Lt. Gov. Arnold I. Palacios yesterday morning to talk about the college’s future plans and the Torres-Palacios administration’s role in these plans.

Joining Deleon Guerrero at the meeting at the Office of the Governor conference room were other members of NMC’s leadership, during which Torres congratulated Deleon Guerrero on his new role and praised Frankie Eliptico for “holding the fort at NMC” during his three-year stint as the college’s interim president.

Torres also encouraged the CNMI’s recent high school graduates to consider NMC when and if they pursue a college education.

“We’re excited. I got some updates on the buildings, the master plan, and new programs that will be rolling out so we’re here to continue the partnership and make sure that NMC is successful. …The [Torres-Palacios] administration is in 100% support, and [will] make sure that the new facility is expedited for students,” said Torres.

Palacios has high hopes for the college’s future. “I’m looking at the team that you guys are introducing to us this morning, and I’m very excited. A lot of our own people are coming back to put together this college and realize the vision we all had for this college,” said Palacios.

Deleon Guerrero thanked Torres and Palacios for their continuous support of the college, and lauded Eliptico for what he was able to accomplish during his interim presidency. Deleon Guerrero said he and Eliptico “go way back since junior high” and that he has always enjoyed working with Eliptico and the rest of the team at NMC.

“I’m very happy to join [Eliptico] and the team with everything they’ve built at the college. They’ve sailed that proa [indigenous canoe, which is NMC’s logo] through some of the most turbulent waters, whether it be typhoons, austerity measures, or the pandemic. They kept it afloat, they kept sailing ahead, and now we’re just really excited to be building upon that success toward a brighter future,” said Deleon Guerrero.