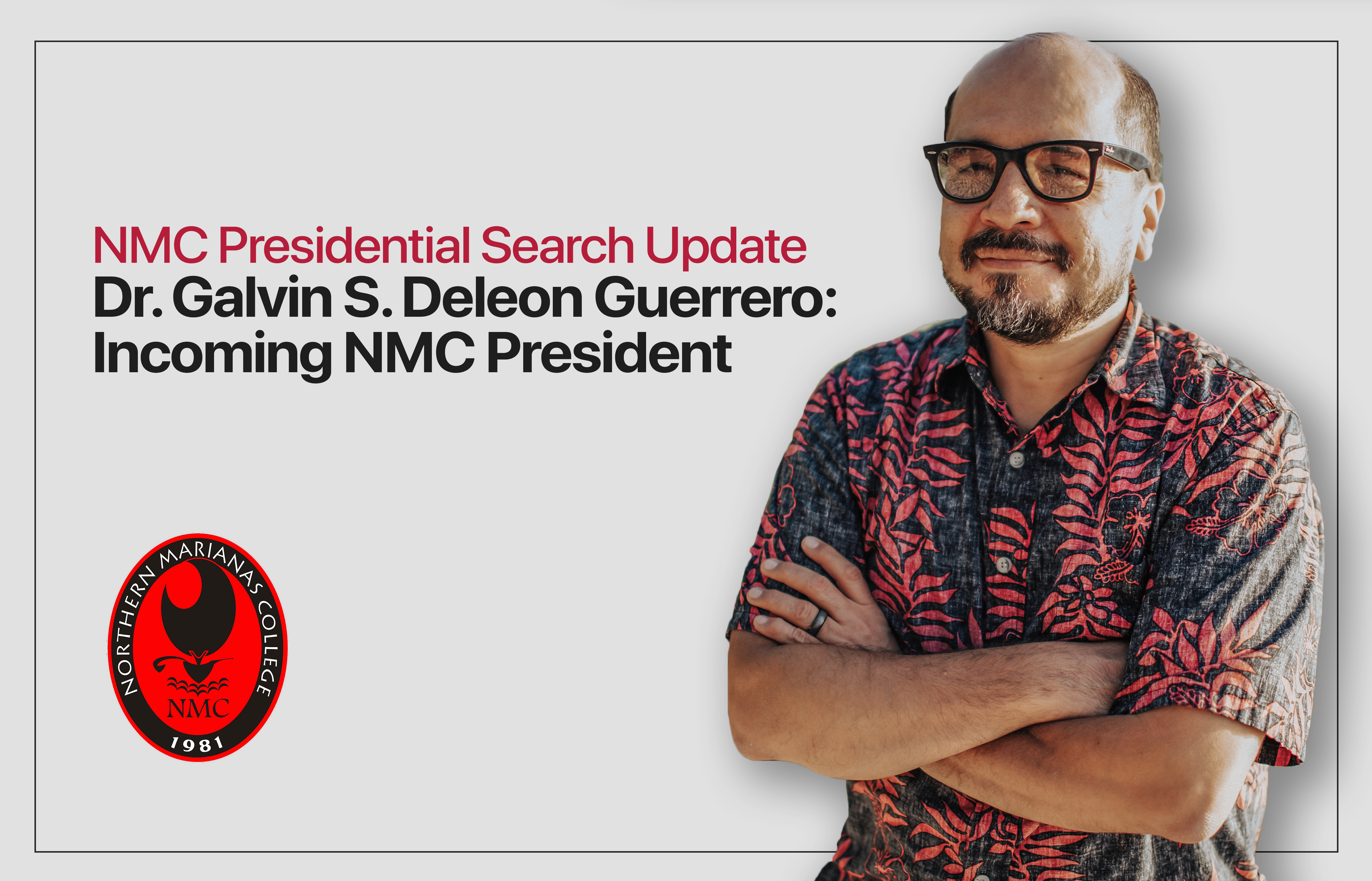 On May 7, 2021, the Northern Marianas College Board of Regents unanimously voted to offer the position of NMC President to Dr. Galvin Sablan Deleon Guerrero. The next step in the presidential search process will be the negotiation of the terms of the contract and the identification of an official start date.

An accomplished, long time-CNMI educator and community leader, Dr. Deleon Guerrero is no stranger to Northern Marianas College. Among many roles he has had at the College, Dr. Deleon Guerrero served as a member of NMC’s Board of Regents from 2001 through 2006 and also worked at the College as the institution’s Director of Institutional Effectiveness from 2009 to 2011. His biography is noted below:

Dr. Galvin Deleon Guerrero earned a Bachelors of Arts degree in English from the University of Puget Sound, a Masters of Arts degree in School Administration from the University of San Francisco, a certificate in digital filmmaking from New York University, and recently an education doctorate in organizational change leadership from the University of Southern California’s Rossier School of Education. For over two decades, he has served in many educational policy positions, including the state Board of Education for the Northern Mariana Islands, the Board of Regents for Northern Marianas College, and as an education adviser for the Office of the Governor in the Commonwealth of the Northern Mariana Islands. He has also served in numerous educational leadership positions in K-12 and post-secondary institutions, including vice principal, principal, director of institutional development, director of institutional effectiveness, and accreditation liaison officer. Along the way, he has also continued to teach high school and college courses in Speech and Debate, AP English Literature, AP US History, and AP US Politics and Government. In 2012, he was appointed the president of Mount Carmel School and since then has almost tripled the school’s enrollment, from about 250 in 2012 to its current enrollment of 605.

Over the years, Dr. Deleon Guerrero has also coached and mentored hundreds of students in theatre, film, speech, debate, and mock trial. With Mount Carmel School’s Theatre Club, he has produced over 50 stage and film productions ranging from plays by William Shakespeare, Disney musicals, to original scripts. These productions included award-winning films that have been featured in film festivals around the world, such as the recent “We Drank Our Tears” anthology that tells the stories of indigenous Chamorro and Carolinian civilians surviving during the World War II battles on Saipan. In speech, debate, and mock trial, he has coached 16 winners in the Attorney General’s Cup Speech Competition and nine winning teams in the CNMI Mock Trial Competition, with two students winning best performance awards at the national level and the 2018 CNMI Team winning the prestigious Larry Bakko Award for Professionalism at the National High School Mock Trial Competition.

In addition to his commitment to Mount Carmel School, for over a decade, Dr. Deleon Guerrero has remained committed and connected to the Northern Marianas College, teaching various courses, providing training to the Board of Regents, and offering consultation on accreditation matters. Dr. Deleon Guerrero also helped launch Northern Marianas College’s prior learning assessment program in 2014, which helps non-traditional students earn academic credit for their experiential learning. In addition to teaching the program to this day, he also wrote his doctoral dissertation about the program, providing key insights into how the program works and how the College can better meet the needs of adult learners.

Statement from the NMC Board of Regents Chairman Mr. Charles V. Cepeda to the NMC Campus Community

On behalf of the NMC Board of Regents, I am pleased to provide an update to the community, especially our students, about the search for the next President of the Northern Marianas College (NMC).

First, I want to recognize the hard work that the members of the Presidential Search Committee (PSC) have done as part of our search. They have done their best to be efficient and diligent in their work and they should all be commended.

The PSC represented a diverse group of stakeholders, which included the students, faculty, staff, administrators, and the Board of Regents.

The work and recommendations of the PSC had been transmitted to the Board, and the NMC Board of Regents discussed and agreed to move forward with the second phase of the interviews, which took place between April 28-30, 2021.

On Friday, May 7, 2021, the Board voted to offer the position of president to Dr. Galvin Deleon Guerrero who we believe will bring decades of educational leadership and experience to his new position as NMC. His passion for education and dedication to students, employees, and to advancing NMC will continue the momentum of NMC. The next step will be the negotiation of the terms of the contract and the identification of an official start date.

The members of the Board of Regents also want to recognize Interim President Frankie Eliptico and his hard work and leadership, especially during some of the most difficult years at NMC. He will continue to serve in his current capacity until the new president begins his term. Interim President Eliptico will ultimately return to his post of vice president of administration and advancement of NMC, where he will continue to play a critical role in the College’s growth.

We ask everyone’s continued support of Interim President Eliptico and acknowledge he is still in the office of the President of NMC. The Board of Regents will closely monitor the transition period and provide strict guidance to the incoming President on the work of Interim President Eliptico as it is highly respected by the Board and to any changes in personnel, organization chart or policies will be strictly critiqued by the Board.

Thank you again for all you do for NMC and for our community.